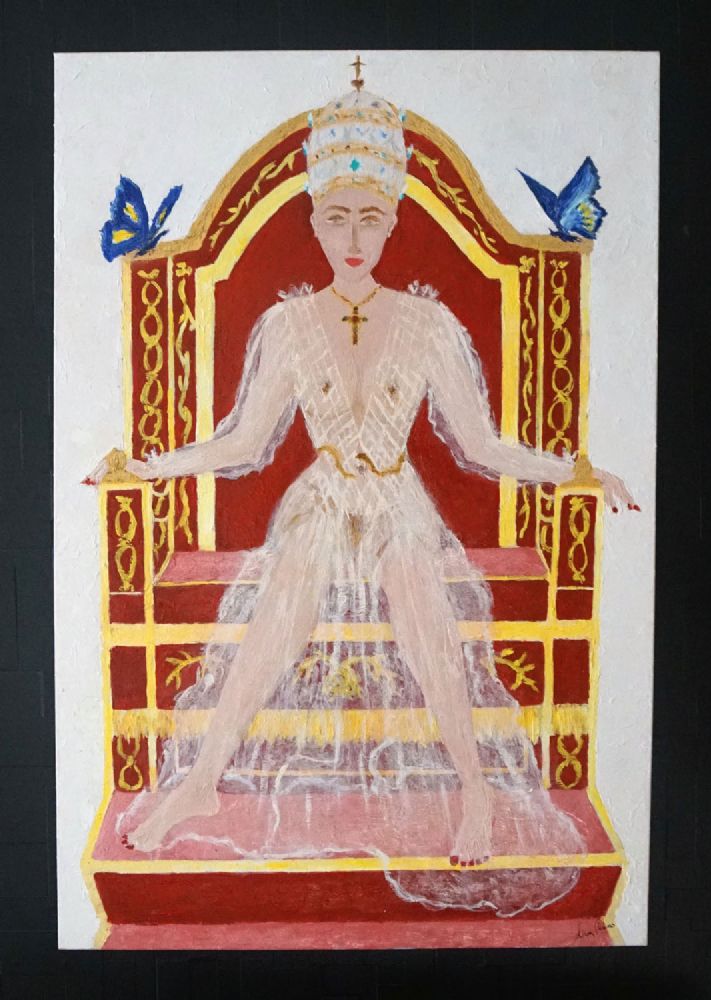 Depicting a sexual woman, seemingly full of conceit, graced with a transparent dress that would render vulnerable and shame the most self-assured among us, provocatively adorned by the church′s symbol hanging from her exposed neck, wearing a peacockish miter, and scandalously seated at the Pope′s throne chair as if it were her own, should threaten, offend and enrage as it is counter to all that we have been thought about the church and about what is virtuous. Yet, this painting does not threaten, offend or enrage. It unexpectedly reveals a state of the world that could be or, perhaps, should be.

Maddalena′s sexuality is not strange, it′s harmonious, nurturing.
Maddalena′s revealing dress and nudity are not coarse or jarring, they flow naturally, effortlessly.
The cross on Maddalena′s neck does not undermine the church, but reveals her faith.
The miter on Maddalena′s head is not peacockish, it highlights her beauty in service of her virtue.
Maddalena′s usurpation of the Pope′s throne chair is not scandalous, it bestows authority in service of her faith that is timeless.
Maddalena′s being and gaze are not conceited, weak, uncertain, or that of prey or foe, they are stirringly humble, wise, assertive and magnanimous.

It is this contrivance, this dissonance, so beautifully executed by Lina Russo, that makes this work so exquisite, so enchanting, so valuable

Send me an email about this work for more information